Helping as a Eucharistic Minister for a mass with the Pope in St. Peter’s Square!

As a kid, I was adventurous, big-hearted, and entrepreneurial. I wanted to be a professional football player, or maybe a politician or businessman. No matter what I ended up doing, I had a firm conviction that I was going to do a lot of good in the world. I imagined myself traveling on my own, being independent, or even living in the wild for months at a time. I never would have guessed that I would be where I am today.

I grew up Catholic, but I wasn’t very spiritual or even interested in the faith. I cannot tell you what my opinion of the priesthood was because it hadn’t even crossed my mind as a possibility. Priests were guys that weren’t able to convince a woman to marry them, I thought…

In junior high, all of the ‘important stuff’ (popularity, football, and girls) was going well for me. For some reason, though, I felt that my life was not heading in the right direction, mainly because of my group of friends at the time. 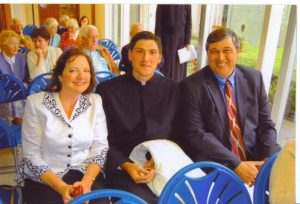 With my parents the day of my first profession in Ireland.

This wasn’t a thought from the spiritual perspective; even in the worldly sense, I just had a feeling we were going to end up losers: addicted, narcissistic, dependent, in prison, or dead… an insight that proved to be true much sooner than I thought. I really didn’t know where to go or what to do.

When I was fourteen and trying to juggle football practices and band camp one summer, I agreed to participate in a Catholic sports tournament in Baltimore. During the tournament, a priest gave a talk to the six thousand people that were there. But I felt like the only one in the room. He said something that struck me like nothing ever had before:

“You are only happy in life if you do what God wants of you,
what God created you for.”

Immediately, I felt very strongly that God wanted me to attend a Catholic boarding school for boys in New Hampshire and that I would be happy there. I still don’t know why I wanted to go to this particular school, but I saw it as an adventure and a chance to find a new group of friends.

When I presented this to my parents, they were perplexed. In their minds, it had all happened so quickly and I had worked too hard in preparing to go to my high school to just change my mind. In a few days, however, they agreed to let me go.

Years later, my parents told me that this was the first time I had ever told them I wanted to do something because God wanted me to do it. Even though this was new and surprising to them, they had the faith to cooperate with what God had placed in my heart. They knew it was genuine because I wasn’t smart enough to manipulate my parents by saying, “God wants me to do this…” 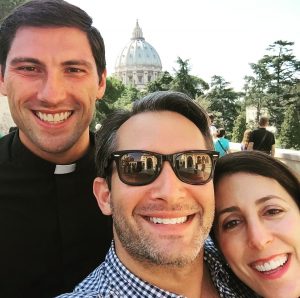 Giving a tour of the Vatican to some friends

Even arriving at the school, I felt very at home. Through the most curious of circumstances, and by God’s providence (or should I say, humor), I found out it was a high school seminary for young men discerning a call to the priesthood. At the time, I was not even open to considering the priesthood, yet since I felt at home, I decided to hang around. What this school gave me was a richer and deeper spiritual life that eventually enabled me to see that God might be calling me to serve him, and I began to see that as something beautiful and worthwhile!

Thus, upon completing high school, I joined the seminary, and God has gradually and beautifully revealed his plan for me. I have lived and worked in six different countries, studying, working at Catholic schools, and giving business ethics presentations or Vatican tours. Through it all, and after many years of discernment, I feel affirmed that God is calling me to the priesthood with the Legion of Christ.

They Won't Beat Me (Video)
Simple Experience of My Vocation (Video)